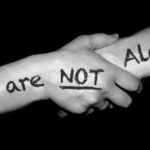 I was born in Cape Girardeau and grew up in a little town called Daisy. When I was in school as a kid, I was often bullied for my weight and only had a few kids at school who I could call friends. When I came home from school, my parents fought. Although he made sure we had the things that we needed like food on the table and a roof over our heads, I didn’t always feel like I had a strong relationship with my dad. This has changed since then, but growing up, he came across as an angry person a lot of the time.

By the time I was 12, my parents started the process of divorce, and like most kids whose parents get divorced, I felt pressured to pick sides. Throughout all this, those few friends that I had at school started picking on others, so I joined them in order to feel accepted. My parents’ divorce finalized when I was 14. Around the same time, my friends decided to make me their new target for bullying. I felt trapped and helpless, but I ended up toughing it up until my mom brought up the idea of switching schools for a new start.

At age 15, I transferred to a new school. I wasn’t bullied a whole lot, but I had trouble connecting with people and making friends, and I didn’t have social skills. I was eventually able to make a friend who was also new to the school, but I still felt a lack of purpose and direction. It was around this time that I started to feel hopeless. One night, I got angry about something I can’t even remember and punched a television set. My mom ended up taking me to the ER for a possibly broken hand. During the intake, I was asked if I was experiencing any suicidal thoughts. At the time, I have had thoughts of not being here anymore, so I said yes. That was the first time that I had told anyone about this, and I will always remember the tears my mother cried that day.

I was released from the hospital after a few hours. I ended up seeing a doctor who diagnosed me with Major Depression and Generalized Anxiety and put me on medication. However, I believed that medications were just a way to control me and make me vulnerable to people and what they put me through, so I would often not take them.

When I turned 16, my parents found happiness with new partners after their divorce, but I was left with emotional pain. I felt like I was robbed of my childhood, because I had to worry about my parents fighting, bullies at school, and how I was going to make it to the next day. I was angry and took my frustrations out on the world; I went back to being a bully in order to cope with my pain and frustration.

At age 17, I began a relationship with a girl. Unfortunately, I couldn’t drive to go see her as I didn’t have a car or license. It didn’t work out between us anyways, but the reason for our breakup was a shocker; she ended up dumping me for a guy that I used to bully. Being dumped hurt my self-esteem, making me feel like I wasn’t enough for someone. But I felt like it was karma because of how harsh I was to that guy in the past.

When I graduated high school, I started my first job as a cook at a restaurant, but it was a very stressful and sometimes toxic environment. I started a Business program at a local college, but I was doing is mostly because it’s what mom wanted me to do. When I turned 18 and got my license and a car, I tried to get back with the girl who dumped me, but that didn’t work out. Again, it seemed like everyone was happy but me, and I didn’t see any happiness for me in the long run. In June of 2013, I had my wisdom teeth removed and was dealing with a lot of physical pain. With the physical and emotional paint that I was feeling at the time, I attempted to take my own life with pills and prayed to God to take me. I woke up the next morning and felt like, since suicide didn’t work and that felt like my last option, I was just going to have to suck it up and deal with everything like I’ve always been told to do.

Some things ended up getting better when I was 19. I started a diet and lost 60 pounds, was utilizing my computer skills in college, and started to have a good relationship with my dad. I graduated college with an Associate’s Degree in Business. I was socializing online with people with interests common to mine. I ended up becoming friends with a guy from England who I am still close with today and would end up being a big part of my story. A month after graduating college, I got a job that was fulfilling at the time. Life seemed good at the moment, but things wouldn’t be like this for long.

Around my 20th birthday, I went through another breakup that I took hard. My first high school friend moved away and didn’t keep in touch. My mom moved in with her new boyfriend, leaving the house to me and my siblings. With important parts of my life fading away, my mental health declined, and my job performance and daily life followed suit. I began having suicidal thoughts again and would even write suicide notes. I did not follow through with any attempts at the time because, since my first attempt failed, I didn’t see the point in trying.

I ended up moving into my dad’s house and sharing a room with my step-brother at the time. One day, my step-brother got upset with me because I was being messy and had poor hygiene (common for people with depression). I said that he wouldn’t have to worry for much longer, because I probably wouldn’t be around for much longer. He asked what I meant by that, and this was the first time in a while that somebody seemed to care, so I told him about how I’ve been struggling. After that, he realized that I was struggling with my mental health and became supportive. This changed something in me; like I said, I had not seen someone show that compassion in a while.

After our conversation, I felt comfortable reaching out to other people. I contacted my Facebook friend from England and shared what was going on. He offered a listening ear whenever I needed it and suggested that I get back into treatment. He also gave me the idea of volunteering in order to find a purpose and some positive people to be around. By age 21, I was back in treatment, seeing a counselor and doctor. I was taking my medications as prescribed; unlike before, I knew that people supported me and didn’t want to take advantage of me, so I became more open to taking medication. In counseling, I realized that I was holding a lot of resentment regarding my parents’ divorce. I was able to sit down with my parents separately and address this, and they were very understanding and wanted to support me and my recovery in any way that they could.

I eventually started volunteering for the American Foundation for Suicide Prevention to give back and help those with struggles similar to mine. I ended up sharing my story at the 2016 Cape Girardeau Out of the Darkness Walk. I networked with people at this event that led me to a speaking engagement in Kansas City. I finally found purpose in life and positive people to be around. I thought that nothing could ever go wrong again, and I couldn’t have been more wrong.

Around the time I turned 22, I got into an argument with one of my siblings. We both said things that can’t be unsaid. However, my sibling ended up in the hospital shortly after this, and I felt guilty and angry with myself. I apologized to my sibling, but I still felt responsible for what happened. To cope with the depression that came with this and guilt that I had going on at the time, I started engaging in self-harm. I did not want to die, but I felt like I needed to punish myself for my actions. Self-harm eventually became an unhealthy way for me to cope with depression, replacing mental pain with physical pain. After a few months, my family became concerned for my life, and I eventually did too.

I entered a hospital in September 2017 where I was able to be safe from self-harming. While in the hospital, I ended up developing new coping skills to replace self-harm. After getting out of the hospital, I was educated about a few places that I could go for support. This is how I found the Peer Impact Center, a drop-in center under Community Counseling Center for people in recovery that offers support groups, crafts, resources, and socialization. I actively attended for a few months and eventually started volunteering. After volunteering for a month, the director of Peer Impact Center at the time noticed my passion to help others and hired me on as staff. I felt a lot of fulfillment out of this, because I got to help people first hand and see them where they are at. I worked at Peer Impact Center for a year and a half before being promoted to a Peer Support Specialist role that involved me being a part of Treatment Teams and providing more consumer-based support.

I’ve had many challenges in my recovery since then, but I’ve been able to overcome these challenges and grow as a person in recovery. I’ve learned that the best person you can love is yourself. There are things that I see on the job that trigger memories sometimes, but I’ve learned to manage my mental health with self-care. There are still days where I feel better off dead, but I’ve learned to cope with these feelings and reach out for support when I feel like this. The world we live in is more divided than ever. We all have our own beliefs and values but remember that listening to someone non-judgmentally can save their life. If I never found those people that took the time to listen to me, you may have not heard my story today.